In industrial environments, high process temperatures, pressures, and vibration make it necessary to have a robust temperature sensor. Fast response time, accuracy, and stability are also needed. While several types of temperature sensors are available, the two most commonly used in the process measurement industry are resistance temperature detectors (RTDs) and thermocouples (T/Cs). Here we will discuss RTD CONSTRUCTION AND TYPES OF RTD briefly.

RTD CONSTRUCTION AND TYPES OF RTD

RTDs and T/Cs have several construction characteristics in common.

How RTD works? It works on principle of electrical resistance with directly proportional to temperature, this is called thermoresistivity. So We can predict for temperature by measuring the resistance of RTD.

And for most conductors (except carbon), ρ changes depend on α, the temperature coefficient of resistance. α is different for different materials and
Rt ≅ Ro (1 + αt)
Ro = resistance at a reference temperature, 0°C
Rt = resistance at temperature, t
This change in ρ is completely predicable and reproducible for  many materials. The material chosen for an RTD is chosen for its large α, linearity, and temperature range. The conductive material is most often platinum. The most common configuration of an RTD is a probe form.
An RTD probe consists of a protective sheath, which is often a closed-end stainless steel tube, a sensor element, lead wires, and a threaded termination. 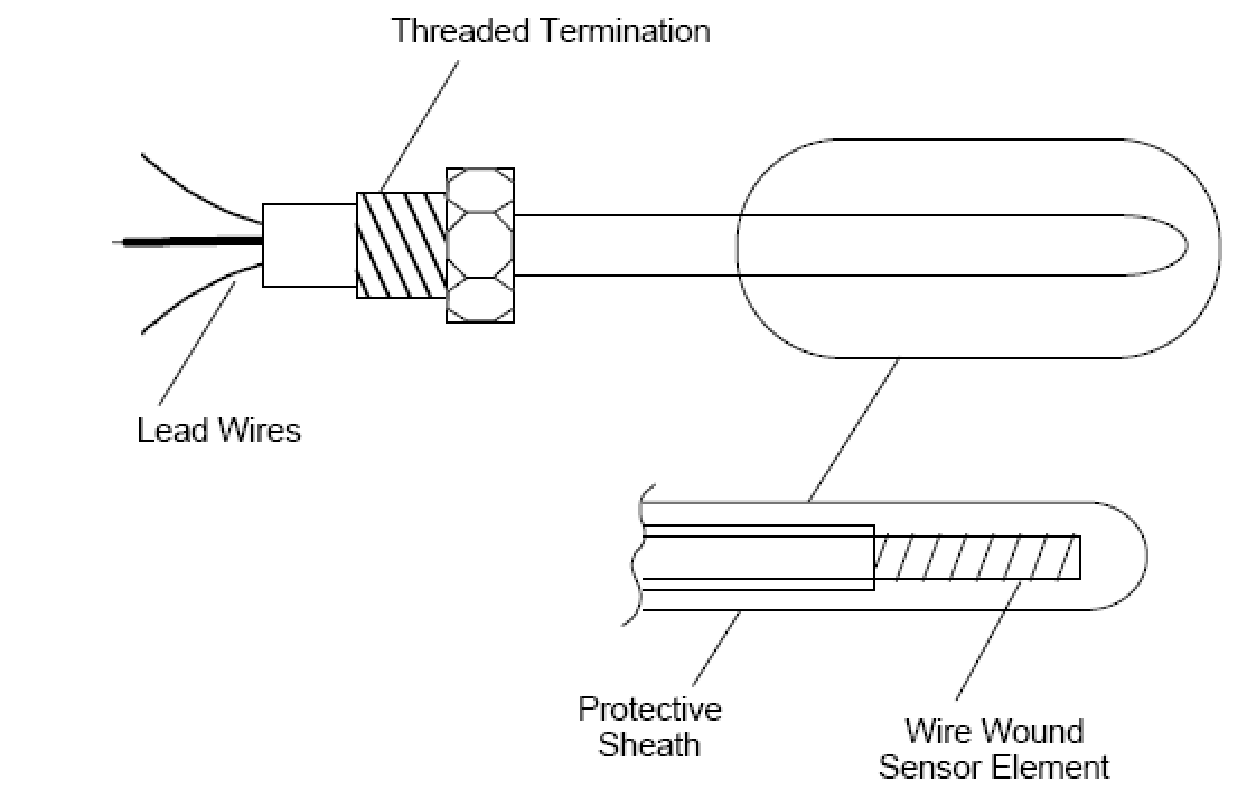 Figure RTD Probe Construction
Although an RTD probe has a protective sheath, it can be inserted into a thermowell for added protection from process contaminants. 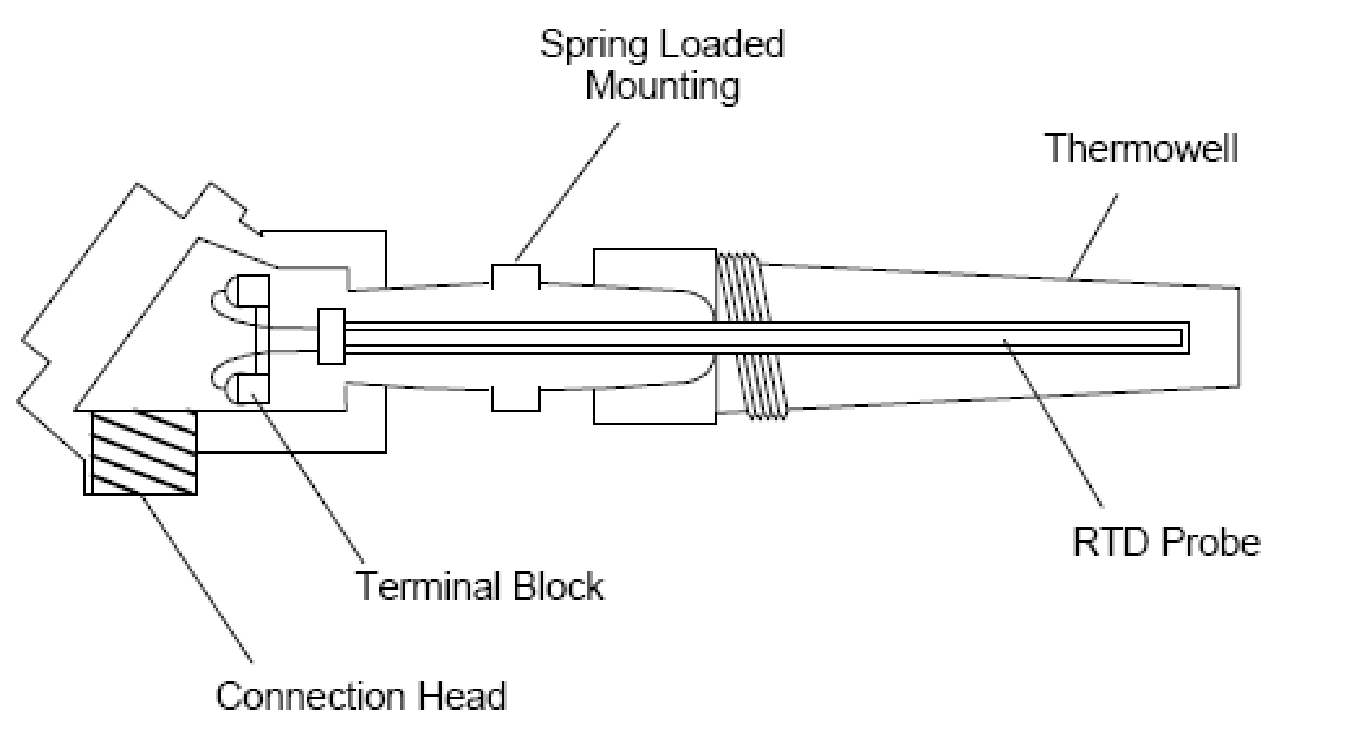 Figure RTD inserted in a Thermowell

Mostly characteristics of RTD can be expressed based on matrial used for RTD like metal or alloy. To be useful in an RTD element, the metal or alloy must have the following characteristics:
The three types of resistance metals most commonly used to construct RTDs are platinum, copper, and nickel.

Nickel RTD elements have a high resistance change per degree of temperature change, but have  poor linearity, limited accuracy, and a relatively narrow temperature range. Nickel elements are most commonly used in applications in which accuracy is not critical. Figure18 compares thermoresistive characteristics for platinum, nickel, and copper RTD elements. (Note the platinum element’s wider temperature range and more linear. 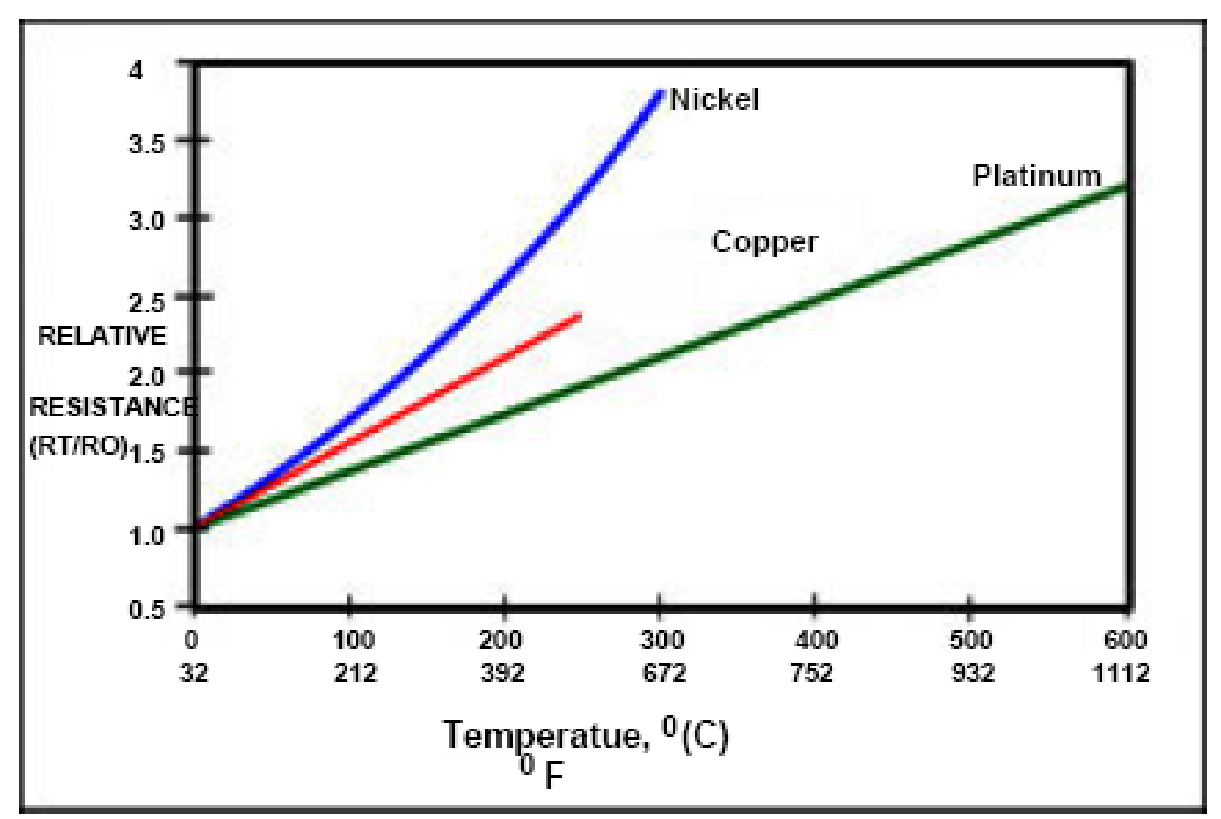 When you want to get exact measurement of temperature , you should measure the resistance of RTD. How much is error can be expected for RTD, for copper wire which is connected to sensing element of RTD adds some amount of resistance in temperature measrement. this additional resistance must be observed, if you ignore this resistance, you will face some error in temperature reading. This phenomenon is called lead wire effect of RTD. Now it depends upon the length of wire running, greater the length greater will be error or lead wire effect in temperature measurement. Now you will get answer of why we use three wire or four-wire RTDs instead of two-wire RTDS. Thats why! Happy! For compensation of these lead wire resistance.
In three wire RTD, we add only one additional copper wire to the lead wires and in four wire RTD, we add one additional copper lead wire with each existing lead wires. 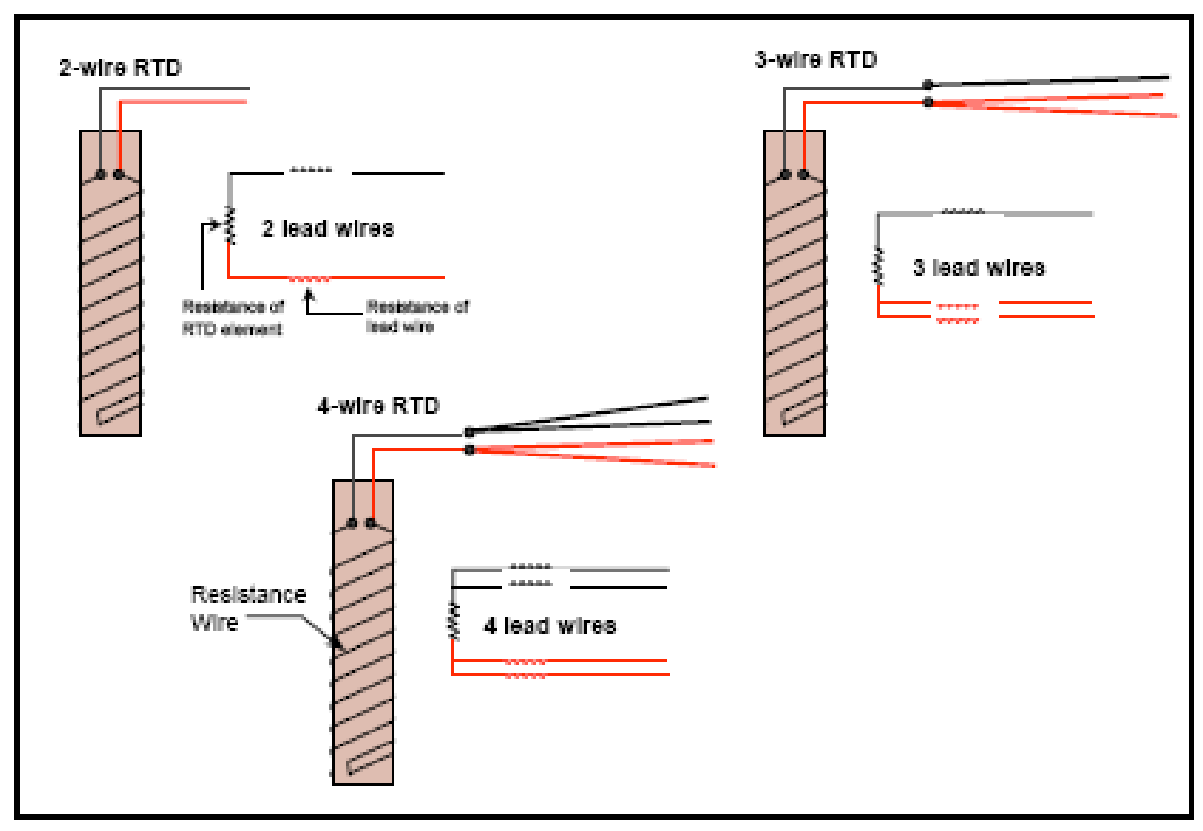 Four-wire RTDs provide the best lead wire compensation. A constant current   is passed through the outer lead wires LW1 and LW4 ( see fig 21 ). Because the voltage drop is measured across lead wires LW2 and LW3 (i.e., no current flows through lead wires 2 and 3), all that is measured is the resistance of the RTD.

Slow Dynamic response: The RTD sensing element consists of an encapsulated wire cut to a length that gives a predetermined resistance at 0°C. The temperature sensitive portion of the probe, which depends on the length of the sensing element, is from 0.5 to 2.5 in. The RTD is
thus considered to be an area-sensitive device, and has a significantly slower dynamic response than point-sensitive devices (like T/C).

Remedy: This problem is of little importance. RTDs are invariably installed in thermowells. Because these thermowells represent a major contribution to the slowing of the dynamic response, the minor differences between RTD and other sensors are insignificant.

The RTD is a passive resistance element, and a current must be applied to it to develop an output signal. This current generates heat, which becomes objectionable when it is sufficient to significantly change the temperature to be measured.

Use only a limited amount of power to produce the output signal; however, the self-heating effect is difficult to specify quantitatively, because the heating depends on the  configuration of the RTD element, and its environment (e.g., fluid velocity past the element).

Remedy:
Do not mix RTDs with different temperature vs. resistance curves.

Copper Lead Wire for connection of an RTD to the transducer, although a satisfactory trade-off between cost and resistance, represents a resistance in series with the RTD and thus is a source of inaccuracy. For long transmission distances, ambient temperature effects can cause appreciable errors.

Remedy: Compensate for lead wires and connection effects by designing the RTD as a 3- or 4-terminal device.
paktechpoint.com
Facebook0Tweet0Pin0LinkedIn0Email0Shares0